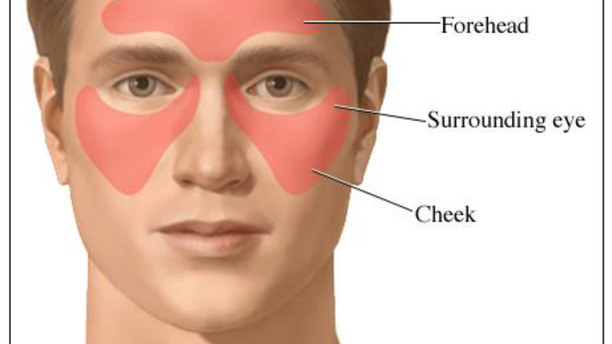 Not surprisingly for this time of year, there are a lot of viruses around at present, causing colds and flu.  These highly infectious diseases particularly affect the upper respiratory system, such as the nose and sinuses, as well as  the lower respiratory system, i.e. the lungs. The sinuses are a connected system of cavities in the skull, behind the nose, eyes and cheeks. They open into the nose, and their function is to allow mucus to drain and air to circulate normally. A lot of people, including myself on occasion, suffer from inflammation of the sinuses, which often results in unpleasant and even dangerous infections.  These problems are especially common in autumn and winter, when many of us succumb to the aforementioned colds and flu. These nasal conditions are also common in midsummer,  at the height of the hay fever season: allergies to pollen lead to many problems with the nose and sinuses, i.e. sneezing, itchy and watery eyes, nasal blockage, inflammation and pains in the forehead area, etc. There are a few ways you can deal with these debilitating health issues, as below:

1.) Cut dairy products out of your diet.  These foods are highly mucus-forming, so consequently they make nasal/sinus problems much worse (besides being bad for the health in many other ways too). Since I went vegan a few years ago, I have noticed a great improvement in my sinuses, and in fact in my health generally. I don’t succumb to as many viruses now, and when I do occasionally catch one, the symptoms are nowhere near as bad as they used to be.

2.) Drink plenty of pure water (i.e. filtered or mineral water), which helps to flush your sinuses out.

3.) Eat spicy foods, such as chilli, which are anti-inflammatory and help to increase the circulation, so also help to clear nasal passages.

Another method, which is a kind of immediate, quick-fix solution, is a simple physical exercise which I use when necessary. It doesn’t cure long-term problems, but it does give some temporary relief. When you are experiencing a severely blocked or runny nose, or are sneezing a lot, do as follows:

*Push your tongue against the roof of your mouth.  Apply pressure but don’t overdo it.

*Place your thumb between your eyebrows.

*Press down with your thumb for around 30 seconds, applying quite a lot of pressure, but don’t push too hard.

You should find that your sinuses will begin to drain almost immediately.  It works because the vomer bone in your nasal passages will rock back and forth with the pressure, which loosens the mucus in your sinuses, thus allowing it to drain.

So there you have it – a simple trick to try next time you feel very bunged up! Give it a go.