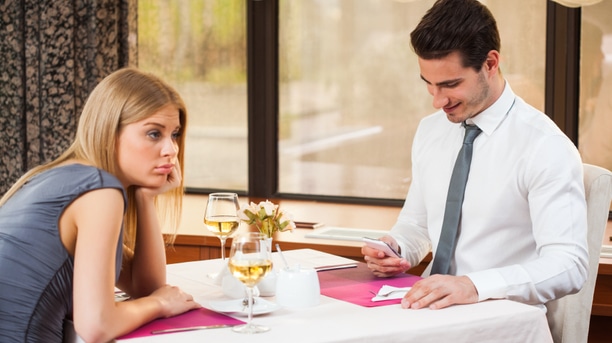 You and your best friend don’t spend much time together since life started changing—college, marriage, and more. It’s a beautiful day and you’re both sitting at your favorite restaurant. The food is served and you’re ready to dig in. Steak, yummy! You make a joke about something and your friend laughs at the exact moment. At first you think she’s laughing at what you said but you realized the timing was too soon. You lift yourself up a little in your seat and realize she’s actually laughing at something on her phone. In fact, she’s been scrolling down her Facebook news-feed the entire time!

Does this sound familiar? It’s obviously not just at the restaurant. People are so enveloped in their phones—texting, Facebook, Pinterest, Twitter—at almost all times, no matter where they are; even when driving. (Please, whatever you do, don’t use your phone and drive. It’s not worth it.) If this is familiar to you, then you know the frustration. It’s frustrating being with people (especially your significant other) who just can’t seem to detach from their phones. Phones have miniature worlds inside of them and it’s a great experience, but people need to realize that there is a world outside of their phones too, right?

Technology does bring us together—it’s true, but it breaks us apart, as well. Socializing isn’t the same as it used to be. Walk out your door at any time of the day and look for a group of people who are together. Chances are, at least one or two people in that group are using their phones majority of the time (not that you can actually see what they’re doing majority of the time unless you’re stalking them, which I hope you aren’t—but you get the idea). In fact, you are probably guilty of doing this, too! None of us are actually guilt free, and that’s totally okay. It’s normal to be engrossed in our phones and the internet. It’s kind of what this era is all about. However, we need to take a step back and think about what we’re doing, before we end up pushing everyone away!

No one likes to feel pushed aside for someone else, so think about what it feels like to be pushed aside for an electronic device! Not only can people feel ignored and unimportant, but it’s just flat out disrespectful. Time is the greatest gift and it is often unacknowledged and unappreciated. Think about it. Let’s prioritize what’s important to us. As addicting as it can be to easily hold a phone in our hands and flip through pictures and websites, let’s put it down and talk to those around us. Let’s spend time together. Let’s go out together. Let’s cherish the moments we have with real life people, before they are gone and vanish into mere memories.

Our phones and tablets may be replaceable…but our loved ones aren’t.