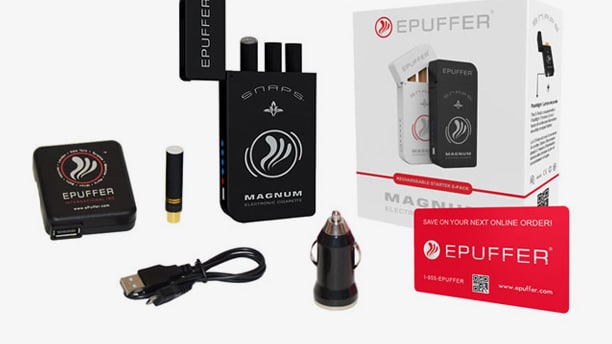 There are very few smokers that don’t want to give up the habit. Addiction, however, along side a potential worry of weight gain and a psychological attachment, often stop them from taking the leap. Addiction is obviously due to the drug, nicotine, that is found in the tobacco. So, is replacing this with another drug of the same strength counterproductive to individuals giving up traditional cigarettes?

Many Smokers who have tried to quit and failed may be tempted to just give up, but there are new smoke-free alternatives, such as those created by ePuffer, incorporate nicotine into their solutions. These implements generally start you at full strength nicotine usage, eventually weaning you down to zero. This process can take anywhere from a few weeks to a few years.

And yet, some believe this is as bad as smoking itself.

The simple and logical answer is No. Some people still believe that because of the nicotine involved, an electronic cigarette still equates with smoking. Smoking implies inhaling dangerous smoke into the lungs. With electronic cigarettes, there’s no smoke and no damage to the lungs, a precious and irreplaceable lifeline. Don’t just think of the government campaigns against smoking, consider your personal reasons for wanting to give it up. Perhaps it goes beyond health. Perhaps your ready to use the thousands of dollars you spend on cigarettes toward building a better life.

Nicotine on it’s own does not block your arteries, wind you, blacken your lungs, and lower your life expectancy. While nicotine is still considered a drug in the same way caffeine is, and is known to be as addictive as sugar, it is far less harmful to your lungs and overall health than smoking. Nicotine doesn’t pose an equatable threat to health – it can, however, calm the nerves and increase alertness, the same things you want from your cigarette, without all damage

Tar blackens your lungs. Smoke inhalation results in shortness of breath. Chemical ingestion causes cancer. Remove these factors and instantly you are:

With ePuffer electronic cigarettes, you still receive a nicotine dose, which will help to drastically reduce and even potentially eliminate your cravings. This will also help to stop shakes and withdrawal symptoms frequently incurred, and it will make giving up easier, as it helps you kick the habit.

You may be surprised that the answer, is NO. Nicotine on its own is rarely addictive.

Technically speaking, nicotine is not significantly addictive, as nicotine administered alone does not produce significant reinforcing properties. However, after co-administration with an MAOI, such as those found in tobacco, nicotine produces significant behavioral sensitization, a measure of addiction potential. This is similar in effect to amphetamine.

Thus, it’s when nicotine is combined with the chemicals of other tobacco products, that addiction generally occurs.

Is Nicotine Bad For You?

Nicotine (a member of the nightshade plant family) has highly positive attributes when observed on its own. It stimulates brain cells, reduces anxiety, increases concentration, and can even suppress appetite. There are no long-term side effects found from ingesting the nicotine plant in its purest forms. It’s only when nicotine is paired with the potent chemicals that make up a typical cigarette, that trouble begins.

ePuffer is the ideal alternative to smoking, by using the least damaging and most beneficial element of a normal cigarette, to help ensure permanent cessation. In addition, if a new non-smoker wants to eliminate nicotine from their system, we provide several products with nicotine concentrations at varying costs, allowing an ex-smoker to wean with relative ease.

Eliminate the smoke, and the body can start to repair itself. An electronic cigarette can help you begin to free yourself today.